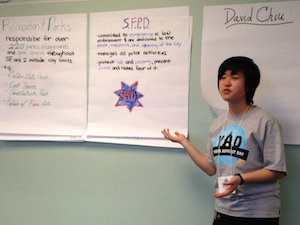 What does it mean to advocate for youth to city officials? The Youth Leadership Team (YLT) learned exactly what that means along with many other Youth Leaders and advocates. Wednesday, March 20th, marked the 4th Annual Youth Advocacy Day in San Francisco, which engaged hundreds of youth from local high schools and programs. The day began with a Q&A panel of the SFUSD department members and youth advocates who answered questions regarding their plans to curb school violence and the declining graduation rate. Students then participated in a youth-led workshop in preparation for their meetings with city officials to present their concerns for their city. The importance of this day was to give city officials a view of community and city-wide problems from the youths’ perspective and to make the often overlooked youth voice heard.

The YW Youth Leadership Team spent months in preparation for this day, planning out an informative workshop that got students to think critically about the issues in their city and how to present them to officials from departments such as the Public Utilities Commission, San Francisco Municipal Transportation Agency, and the Department of Children, Youth, and Their Families. Some of the struggles the YLT faced was making sure  It was a challenge to make sure everything was planned out seamlessly, but it paid off in the end as many left the day with a sense of empowerment and strong voice in support of youth.