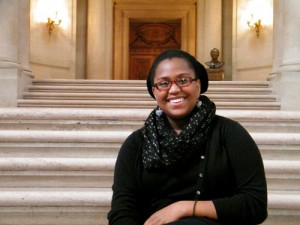 YouthWorks provides a unique opportunity for young people to explore the world of work, to build skills and gain inspiration for a successful future.  Just ask college junior Leah LaCroix.

When LaCroix was in high school, she worked as an intern through YouthWorks.  While Leah had always been interested in the voting process and intrigued by City Hall, her internships in city government solidified her commitment to a career in the political field.

Working in Supervisor Gerardo Sandoval’s office, LaCroix enjoyed the opportunity to learn about city politics firsthand.  When Sandoval was elected to the Superior Court, she was placed in a clerical internship in the San Francisco Youth Commission. “Working at the Youth Commission, I learned that there was also an outlet for youth voice in San Francisco. I saw that there are 17 young people who represent youth in the City, and leaders are listening,” she says. She was drawn to the opportunity to influence City policy on behalf of youth.

After graduating high school, LaCroix went to SF State and became a leader on the Youth Commission.  This past year, in response to a doubling of the cost of the MUNI youth fast pass, she led the commission’s effort to advocate for a Lifeline Pass for low-income San Francisco youth.  After multiple resolutions and negotiations with the Board of Supervisors, the MTA, and SFUSD, the commission’s efforts were successful.  Free passes became available to 12,000 youth for April, May and June.  Reduced-fare passes will be available to qualifying low-income youth starting next year.

LaCroix envisions a future career involving policy work and local leadership, and plans to continue to provide a voice for under-represented groups.  Based on her own experience, LaCroix is an advocate for providing employment opportunities to youth.  “The first job is always the hardest to get, but if you give young people a responsibility, and trust them with that, then it builds their self-esteem into wanting to do greater things,” she says.