Aleda Graham is a worksite mentor who proudly administers the best practices of SF YouthWorks.  She continuously encourages youth while challenging them to reach their highest potential.

Even though Aleda has a very important position at the Assessor-Recorder office, as the Manager of Exemptions and Public Service, she has been an active and committed mentor with SFYW since 2008. Throughout the duration of her voluntary participation, Aleda has supervised several students who have all benefited from her patience, thorough organizational skills and down to earth personality. Interns have testified that they “could just tell that she really cares” about their professional dev 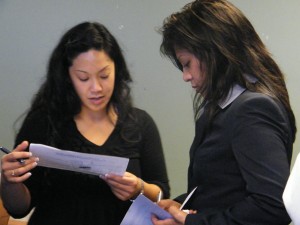 Aleda has a natural ability to meet the student interns where they are.  She makes them feel comfortable while they are building on and learning important new skills under her supervision. For instance Aleda’s interns have been exposed to customer service, the processing of important legal documents and general work ethics, all of which are transferable skills that could be used in any future employment opportunity.

R. Chen, one of Aleda’s current interns, says, “She doesn’t seem like she is the big boss, since she’s nice to everyone”. YouthWorks is pleased to recognize Aleda Graham as an outstanding mentor.

This month’s Mentor Spotlight was written by Employment Coordinator Camile Richard, who places YouthWorks interns with Aleda and her department.