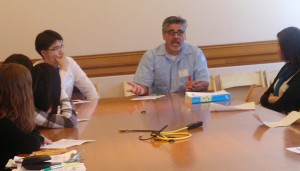 The first visit was to the San Francisco Youth Commission, a group of seventeen youth who are appointed by the Board of Supervisors and the Mayor to advise city leaders about issues affecting the city’s youth.  During the visit, staff discussed their passion for supporting the rights of children & youth and shared the motivations that had led to their own contributions to the work of the commission. In learning about this important city commission, interns were reminded about how important their opinions are to solving the city’s problems, and this drew in their attention.

During an informational interview with Supervisor John Avalos, interns were encouraged to converse casually with this city leader. This promoted open conversation about the Supervisor’s career path, giving interns insight into how an individual can become a city leader. Interns also listened intently as they heard Supervisors’ Legislative Aides describe their past and future goals. This gave interns a chance to realize how one could navigate through various paths, but end up at a rewarding destination.

Photo: Interns talk with Supervisor John Avalos about his path to city leadership