On July 12th, YouthWorks took a group of youth interested in technical careers to learn about renewable technolog 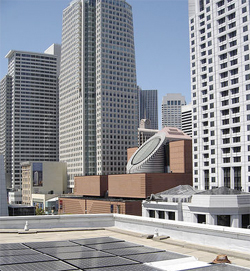 y projects spearheaded by the City of San Francisco.  Lori Mitchell and Jim Andrews of the Renewable Energy generation group talked to the interns about various renewable energy projects going on in the city. They gave a tour of the Moscone Center’s multimillion dollar solar panel system.

Then interns met with Angela Patane who talked to the group about Go SolarSF, a program that provides financial incentives to encourage more installations of solar power systems on properties in San Francisco.

Given the growth of interest and opportunities related to renewable technologies, YouthWorks will continue to partner with City agencies to expose youth to potential careers in this field.