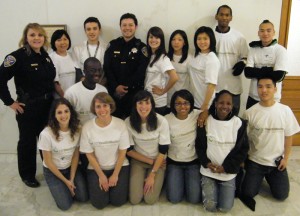 On Wednesday, SF YouthWorks interns, mentors and staff joined hundreds of other advocates for youth at City Hall for a rally and Board of Supervisors hearing on budget cuts to programs serving children, youth and families. In this difficult budget environment, the Department of Children, Youth and Families (DCYF) has had to cut more than $11 million of their budget for youth programs, cuts which will significantly reduce services to youth throughout the city.

Before the hearing, Coleman Advocates for Children and Youth organized a rally against the cuts.  At the rally, Supervisor John Avalos and Coleman representatives spoke about fiscal strategies for prioritizing youth programs in the city’s budget and a proposed progressive tax measure to fund programs for children and youth. Their comments were met by cheers from the assembled crowd.

At the hearing, DCYF director Maria Su described the challenges of the budget process this year and the extent of the cuts. During public comment, youth from all over the city spoke passionately about the importance of DCYF-funded programs in their lives and communities and asked the Board of Supervisors to find ways to restore funding to youth programs.

Many youth employment programs are facing deep budget cuts for the coming year.  YouthWorks and MYEEP interns came to the hearing to testify about the importance of work experience, and the impact that the programs have had on their lives. One YouthWorks intern, Andrew W, said, “I’ve learned so many things from my internship that no textbook can teach. In March, I was able to watch a court hearing at the Hall of Justice and that was a great experience. If you take jobs and internships away from 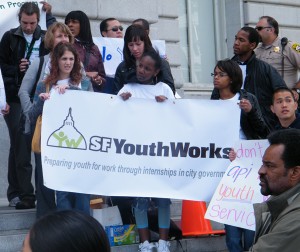 teenagers, you are setting them up to fail in the future. Youth jobs teach teens to be responsible, organized, and to use new skills that will make them more successful. YouthWorks also had workshops that taught me things like how to write a resume, how to get into college, and so much more. I’m really grateful for everything that I’ve gotten from this internship.”

San Francisco youth depend on city-funded programming for many services that are slated for cuts next year.  At the hearing, there was a great deal of emotional and powerful testimony about the negative impact of these proposed cuts.  It is clear that there will be continued advocacy in the coming months by and for children, youth and their families.

Pictured at right: Team of YouthWorks interns, mentors and staff who came out to the rally and hearing.  Pictured at left:  YouthWorks represents on the steps of City Hall at the pre-hearing rally.