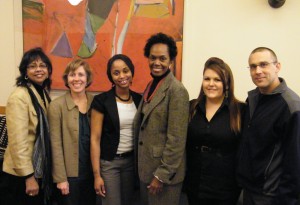 Last week YouthWorks had the opportunity to meet with Supervisor Sophie Maxwell, her legislative aide Alice Guidry, and their YouthWorks intern Natasha P.  Supervisor Maxwell and Guidry had great praise for Natasha, calling her “attentive, compassionate and professional”.  They also highlighted her important role in the office, saying they would be “lost without her.”

Natasha spoke highly about the power of her experience working in a Maxwell’s office.  In her words, “Before getting accepted into YouthWorks, I had no idea about how the city runs. I didn’t know much about politics in general, and I didn’t even know what District Supervisors did. I have really enjoyed my internship and learning about how involved in the community Sophie Maxwell and the other Supervisors are, and how they bring those issues to City Hall. I’ve also gotten to watch many board meetings, and see people from the city fight for their programs and organizations, which has been especially hard with all the budget cuts. I think it has been an amazing opportunity not only to work in City Hall and gain office and phone skills, but to learn about the city works, and how legislation is passed.”

Natasha’s father also joined the meeting.  He expressed his thanks to Supervisor Maxwell and SF YouthWorks for the experience his daughter has had.  He noted that he has seen positive changes in her resulting from her work experience.

YouthWorks thanks Supervisor Maxwell and staff for their support for our interns and program.