Mayor’s Office on Disability Intern Anna Bernick wrote this piece describing her first few weeks as a YouthWorks Intern. To see a video of her presentation, click on the link here. (Her presentation begins at 29:24.) 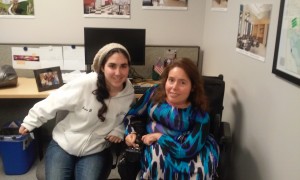 For the past three weeks I have had the privilege to work at the Mayor’s Office on Disability. At MOD I do much more than filing and copying. I go to some of the meetings with the other staff members, write up articles for the website, and do research about the Disability Rights’ Movement.

For the meetings, I have been to three of them. The first one was on my second day of work Tuesday June 10th. The meeting was for Vision Zero, a project first founded in Sweden in 1997 for pedestrian safety on the crosswalks. The program was introduced to SF by Mayor Lee because there were 25 pedestrian and bicyclists’ deaths in 2013 alone. At the meeting, Fire Marshall Commander Ali presented about Vision Zero’s history, John Knox White of MTA talked about VZ’s Safety Education subcommittee, and Supervisor Yee discussed the District Attorney and education program. My second meeting that happened on Friday June 20th was a crucial one because it was the meeting of the Mayor’s Disability Council. The MDC was formed in October 1998 for three reasons:

During that meeting, I was able to make a presentation about myself where I explained who I was, what are the pros and cons of my disability, my career goals, and what I hope to learn during my internship. The MDC meets on every third Friday of the month at City Hall, RM 400 from 1:00 pm to 4:00 pm. The next meeting is scheduled for Friday July 18th. The most recent meeting I went to was on Monday June 23rd. That meeting was for elevators for SROs or Single Room Occupancy. Since many who live in SROs use wheelchairs or have trouble using the stair, elevators are their only option. However since many elevators either aren’t up to code or often break, many residents are often times prisoners in their own homes forcing them to miss things such as medical appointments and important events.

Even though it’s only been three weeks I have worked on many articles. The articles I’m working on now are about the Disability Rights’ Movement, disability rights activists, new updates, and the new staff at MOD. Most of these articles are set to show on the MOD’s website.

Most importantly I am learning a lot about the Disability Rights’ Movement. Events like the 504 sit in of 1977, the “Deaf President Now” protests at Gallaudet University of 1988 and “Capitol Crawl” of 1990 are the most important events of the movement and each event ended in a significant progress in disability rights. As a young person with a disability, I think I along with other teenagers should learn more about this entire movement.