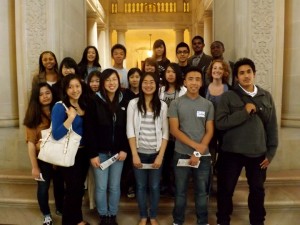 During the months of May and June, YouthWorks staff called, emailed and visited San Francisco City departments to spread the word about our program and our summer service goal. Fortunately, these efforts were successful, and as of today we have placed 250 youth in summer jobs. Over 100 new internship slots were identified, including slots in departments new to SF YouthWorks such as Animal Care and Control, the Department of Human Resources, and the Mayor’s Office of Neighborhood Services.

This increase was possible due to the tremendous generosity of City departments that responded to the Mayor’s call to host youth interns this summer.  We are grateful to all of the City employees who have volunteered, and would like to particularly acknowledge those individuals who put in significant effort to recruit other mentors within their departments:

Thanks to everyone who is are partnering with SF YouthWorks this summer to ensure a successful summer session for 250 San Francisco youth!