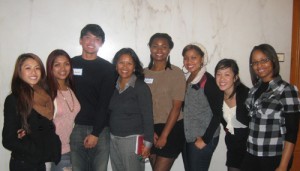 The career exploration event is an opportunity for interns to spark new interests in fields ranging from park and recreation, medical affairs, to politics. In December, employment coordinator Camile Richard and a group of YouthWorks interns visited City Hall to meet two city leaders and learn about their careers. During this career exploration event, interns were able to discuss and ask questions relating to the individuals’ educational history, employment history, and future goals.

Jose Cisneros is the current Treasurer for the City and County of San Francisco. He spoke with interns about his ambition and idea in having “short term interests being put into the bank”.  Cisneros advised our interns to work hard for whatever they are interested or believe in and they will all be successful. The future lies with those who continue to grow and learn.

Hydra Mendoza is the President of the Board of Education and also serves as the Education Advisor to the Mayor of San Francisco. She firmly believes in education being the first priority, constantly asking herself, “how do we move the schools forward with these programs?” Mendoza is currently working on opening a second language program to allow future graduating fifth grade students a chance to speak not one, but two languages.

Interns were able to ask the two city leaders questions, and had a good discussion on a variety of  topics.